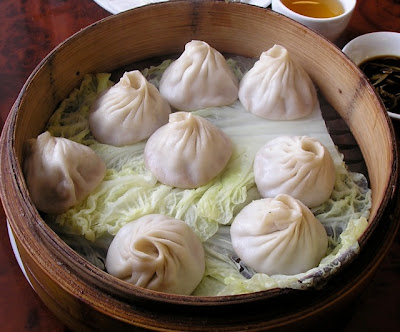 My passion for this morsel began in Shanghai, in the year 2001, when my wife and I went in search of xiao long bao, an adventure that culminated in a uproarious cab ride out to Nanxiang, the suburban enclave that gave birth to it.  We made an 18 minute video detailing this quest:

Of the hundreds of Chinese dumplings and snack foods, some consider xiao long bao to be the best.  In my opinion, it ranks as one of the great achievements of any cuisine: understated in appearance, this sensuous dumpling hides within it a savory, ginger-laced combination of crab or shrimp and pork, surrounded by a velvety broth which literally bursts in your mouth when eaten whole…

As far as the "technology" of these xiao long bao, combining meat and soup within a wheat wrapper dumpling might seem impossible, but it depends on a simple, ingenious device: the soup is gelatinized and cooled before being mixed with the meat filling.  When the xiao long bao is steamed, the soup “melts” and remains contained within the dumpling until it is breached, as it were, by a hungry enthusiast, of which there are millions in China and the rest of the world.

All of this is the good news.  The bad news is, these little devils are tricky to make.  They will taste divine, but don’t expect them to look like the dumplings you’ll find in Shanghai.  My test of the recipe was a two day adventure, not counting the hours of cleaning flour off my clothes, the counters, floor and ceiling.

Xiaolongbao, literally translated means, “little steamer buns,” and I’m slightly puzzled as to why, when so many of China's national dishes have lyrical or descriptive names, this most wonderful of dumplings was given such a mundane moniker.  "Dumpling of Heaven" might be more appropriate, or even "Nanxiang soup dumpling" (i.e., Nanxiang tang bao), after the suburb of Shanghai where it was probably invented.  From the student chef’s point of view, however, xiaolongbao’s ethereal taste and texture is in direct proportion to how difficult it is to pleat these dumplings; it is all the more discouraging when you see the lightning fast ease with which specialists fold them, for example, at Shanghai’s famous Nanxiang Mantou Dian, where they make a pork and crab version .   Youtube has several videos showing the workers at this Nanxiangsnack restaurant pleating xiaolongbao, for example:
http://www.youtube.com/watch?v=b7mXiSjHrLc&feature=related

While the xiao long bao is made in countless dumpling and noodle restaurants in Shanghai, its suburbs, and elsewhere in China, it also has an international following, though it isn’t as well known outside of China as potstickers (guo tie), or even ha gau.the shrimp dumpling featured at dim sum.  A very respectable xiao long bao is being served at Din Tai Fung, a chain with stores in 9 countries, including the United States.
See http://www.dintaifungusa.com/   Overall, I think the student chef will find this delectable dumpling a lot of work to make at first; but, like any worthwhile dish in the
repertoire, well worth it.

To make the soup: Wash the pork and chicken pieces with cold water.  Cut the pork skin into a large dice, and chop part way through the chicken bones and flesh to expose meat and marrow.  To eliminate much of the scum and off-flavors blanch the meat pieces in boiling water for a couple of minutes, strain, rinse and strain again.  Put the rinsed meat in a stock pot with about 6 or 7 quarts of water, along with crushed ginger, scallions and garlic, and bring to a simmer.  Attend to this broth for a half an hour or so after it simmers, skimming any foam and scum from the surface.  Cover, and simmer for 2 1/2 to 3 hours.  Remove bones and flesh with bamboo strainer or slotted spoon, then strain the broth through several layers of cheesecloth.  Return stock to the heat, this time uncovered, and simmer vigorously for 2 or 3 hours to reduce the stock to 3 or 4 cups.  Simmer time is not precise; the point here is to create a delicious, intensely flavored pork and chicken soup which is partly gelatinized.  (You will need 2-1/2 cups of finished, de-fatted broth for the filling).  Refrigerate the soup overnight, and skim off the congealed fat.  Put one packet of gelatin into 1/2 cup cold water to soften; warm 2-1/2 cups clarified, de-fatted soup and salt to taste.  Heat to 180 or 190 degrees (below simmer) and add softened gelatin and stir.  When the gelatin has completely dissolved, refrigerate until cooled and set.

To make the ginger/scallion water:
Crush the ginger with the flat of a heavy cleaver or rolling pin; cut the scallion in 3 or 4 sections and crush in the same way.  In a bowl combine ginger, scallion and one cup of water, and squeeze the ingredients to extract their juices.  Set aside while you continue making the filling.

To make the filling:
Wash and dry the pork, shell and de-vein the shrimp, and chop together into a coarse mince; mince half of the meat very fine.  (If using a meat grinder, put the pork and shrimp through a 1/4” plate, then half of that again through a 1/8” plate).   Add the soy sauce, sugar, white pepper, salt, rice wine and ginger/scallion water, stirring the filling thoroughly in one direction with a wooden spoon handle or spatula.  Sprinkle cornstarch evenly over the mixture and stir thoroughly.  If the 2 1/2 cups of gelatinized pork and chicken soup is cold and set, de-mold it onto a cutting board and dice the gelatin very small, 1/8” or less.  Add it too the meat mixture and stir very thoroughly.  See comment below about testing the filling and dough.

To make the dough:
Combine the two flours in a mixing bowl.  Add hot water and mix thoroughly; when it is combined well, and crumbly in texture, add cold water and continue mixing with a spoon or dough hook if you’re using a mixer.  When dough cool enough to handle, begin kneading; the dough should be soft and a slightly sticky.  If doing this by hand, you should knead the dough for fifteen minutes or so, adding flour if it begins to stick to your hands.  Be aware, however, that a soft, very stretchable dough is required to make xiao long bao, so too much flour will make a stiff, difficult material to work with.  On the other hand, the challenge is to make a dough that is strong enough to contain a hot soup during the time it is being cooked and served.  To balance both concerns, I suggest kneading as much flour into the dough as it will absorb, then letting it rest in the refrigerator overnight, wrapped in plastic.  Bring to room temperature before using.
At any time after you’ve mixed the dough and filling, you can make and steam a small test dumpling to check seasonings, stock to filling ratio, and a sense of whether the dough is right for the dumpling.

To make the dumplings:
Once the dough is at room temperature, place on a well-floured surface,  and divide it into 4 or 5 equal pieces.  Roll the pieces into ropes, approximately 1” in diameter.  Cut the rope into equal sections, about 1” long, and flatten into thick discs.  Roll the discs into 3” rounds, as thin as possible on the edges, and 1/8” or less in the center.  Roll out several rounds and keep them covered as you begin to fill the dumplings (Doing these somewhat ahead once again rests the dough and makes them more manageable).  With a butter knife of flat stick, apply a round tablespoon of filling to the skin, leaving a border of a half inch or so, and begin pleating the edge with your fingers and thumb, overlapping the dough by a quarter inch or so.  The pleat should be squeezed firmly and pulled slightly vertically to prevent the top of the finished dumpling from being too thick.  As you pleat, rotate the dumpling clockwise, making sure the filling remains well below the edges of the dumpling.  When you’ve done approximately 14 pleats, the dumpling should be nearly, but not quite, closed at the top.
(I rolled the sections just under 1/8” or so thick, then cut the disc with a cutter, between 2-3/4” and 3.”   Before you add the filling, flatten the edges of the round to make it easier to pleat.  I rested the dumpling on the floured surface, instead of holding the dumpling as you see them do in Shanghai.
Place the pleated dumplings, separated from one another, on a steamer tray lined with perforated parchment paper or (napa) cabbage leaves.  Steam for 10 or 11 minutes.
Serve the xiao long bao in their steamer trays, since, loaded with hot soup, they are very fragile.  A Chinkiang vinegar/shredded ginger dipping sauce can accompany the dumplings.
Posted by John Sinclair, artist, aka Chef Wang, chef at 8:58 AM