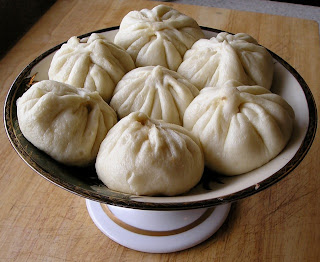 
You won’t find these tasty snacks at the fine dining palaces of Beijing—instead, you’ll see Zhu rou baozi in the side streets and alleys of that super-metropolis. Understandably, the city bureaucrats, and even the central government in Beijing, want to modernize out of existence the seamier side of Chinese life; unfortunately, this includes the unlicensed, unsightly, and occasionally unsanitary street vendors to whom iron-gutted foodies like myself owe their most memorable experiences. In Beijing, during the long run up to the Olympics, the city all but eradicated these makeshift entrepreneurs, and replaced them with spiffy, red-aproned employees in ticky-tacky boxes, all in a row, calling it street food. The China daily shows off these sanitized street stalls in a small photo gallery featuring the more exotic morsels sold there.  Nevertheless, try as they might, city administrators’ attempts to squelch Chinese capitalism is habitually doomed, and you will probably find delicious snacks sold by traditional cooks, out of site of the authorities, for decades to come.

So for now, north of the Yangtze river, in most cities, you will find some sort of baozi sold by sidewalk vendors; they are an inexpensive snack, and yet, along with noodles and rice, constitute the a major staple of the Chinese workers who buy them from their favored neighborhood purveyor. Along with baozi, especially in the morning, these same vendors will often sell mantou, which is steamed wheat flour bread with no filling.

Baozi are sold in many configurations, small to large, fried and steamed, steamed and in southern China, baked. They are close cousins of jiaozi, dumplings, but are usually larger and wrapped with a leavened dough. Baozi have many different fillings—pork and cabbage, vegetables, toufu, mushrooms, red bean paste, lotus seed paste, roast pork, chicken, all with local variations in seasonings and preparation. Nevertheless, the pork and cabbage version, zhu rou bao zi (猪肉包子) is most common.

Smash the unpeeled ginger with the flat of a heavy cleaver so that it will release its juices. Put the ginger in the cup of water, stir, and set aside--1 to 2 hours is preferable.
To the cup of lukewarm water, add the sugar and the yeast and stir until it dissolves. In the meantime, sift the flour into a bowl. When the yeast mixture is foaming, add it to the flour and mix vigorously until the mass begins to stick together. Add the oil, and when the dough coheres enough to remove to the counter and knead for 10 minutes, until it is smooth. It is very important that the dough be soft. Do not add more flour unless necessary to keep it from sticking to your hands and the kneading surface. Once the dough is kneaded, oil the surface with peanut oil and place in a covered bowl in a warm place.
Separate and blanch the cabbage leaves for 2 or 3 minutes in a large pot of boiling water. Remove, drain, and cool. When it is cool enough to handle, roughly chop the cabbage and put in a clean hand towel. Wring out as much of the water as possible, then mince.
Mechanically grind or chop with a cleaver all of the pork into a dice of approximately 1/4". Set aside about a third of this, and mince the remaining pork very fine. Mix together the cabbage, the minced ginger, minced scallion, minced garlic, salt and pepper. Mixing thoroughly with a wooden spoon or paddle of a kitchen mixer, add the cup of strained ginger water, soy, wine and sesame oil. Add cornstarch, and mix in one direction for several minutes. The filling should be moist, almost like batter; add chicken stock if the filling seems stiff or dry.

To make a baozi, flatten one of the balls with your hand, keeping it as round as possible. Roll the discs into approximately 4” rounds, as thin as possible on the edges, and 1/8” or so in the center. Roll out several rounds and keep them covered as you begin to fill the baozi (Doing these somewhat ahead once again rests the dough and makes them more manageable). Smear a couple of heaping tablespoons of filling to the skin, leaving a border of a half inch or so, and begin pleating the very edge with your fingers and thumb, overlapping the dough by a quarter inch or so. The pleat should be squeezed firmly and pulled slightly vertically to prevent the top of the finished bun from being too thick. As you pleat, rotate the baozi clockwise, making sure the filling remains well below the edges of the bun. Complete the process by closing the top with a spiral twist. Place the pleated baozi, separated from one another, on a steamer tray lined with perforated parchment paper or (napa) cabbage leaves and steam, covered, for 14 to 15 minutes. It is very important to make one or two sample baozi to test for salt and seasonings. When you've done this, you are ready to complete the batch of 20 - 30 baozi.

Zhu Rou Bao Zi can be frozen, once they are steamed and cooled, with very little deterioration. They can also be microwaved to re-heat, but steaming for 12 minutes (from frozen) is far superior.