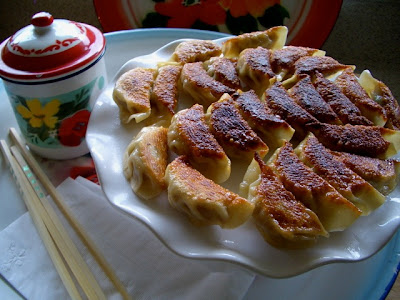 This minutely detailed first recipe for pot stickers and jiaozi is only for those who, like myself, consider eating dumplings as something like a religious experience.

A few years ago in the United states, when asked to name a Chinese dish, most people would say, chow mein or lo mein.  The less savvy might have said chop suey, egg fu yung or egg rolls.  But today, the best known item on Chinese menus is probably pot stickers, or as they are known in Mandarin Chinese, guo tie.  These fried pork dumplings are so common that even grocery store delis have sad, damp heaps of them in warming pans, alongside roast chicken and kielbasa.  (In a more global sense one might think of dumplings as a gastronomical archetype, since stuffed doughs can be seen in just about every culture: raviolis, perogies, knishes, empanadas, samosas, knodels, vushka, pelmeni, Korean mandu...the list is endless) Less famous in the west is the steamed or boiled—and most likely original—version of this dumpling, jiaozi, which is a mainstay of Chinese cuisine.   In fact, jiaozi are at the heart and soul of Chinese culture.  No other food, with the exception of rice and noodles, has a more prominent place in the everyday lives of Chinese: they are a snack, a staple, a holiday treat, and an almost sacred ritual around the Lunar New Year.  During this time, making jiaozi is a social ritual as well, with family and friends gathering round the bowls of fillings and dough, rolling skins, stuffing the jiaozi and talking, until hundreds of the little morsels are ready for boiling.

There is no such thing as an “authentic” Chinese recipe, since within China there is no agreement on how any particular dish should be made.  In China, jiaozi and guo tie are made with beef or pork; they sometimes have fresh shrimp, dried shrimp or no shrimp at all; you’ll find dried mushrooms in some, but not in others; sometimes cabbage, sometimes not.  But in general, the tradition of these dumplings include the ingredients and methods outlined here.

As far as wrappers are concerned, acceptable factory made skins for making jiaozi and guo tie are available at all Asian groceries.  Also, home cooks can take the recipe below and process the skins with a pasta machine, cutting the sheets of dough with an appropriate sized circle cutter; however, the homemade, hand-rolled hot-water version is closest to the traditional Chinese method, and worth the effort in its superior texture: it will be substantial, flavorful and chewy.

About the meat: fatty cuts of meat are not demonized in China as they are in the west; traditional cooks will most often use ground pork belly, here commonly called fresh bacon.  On Chinese streets, you will find vendors selling ground pork for dumplings which is nearly white with fat.  In the present recipe, the cut of pork is optional, and a even lean meat will make an acceptable dumpling. 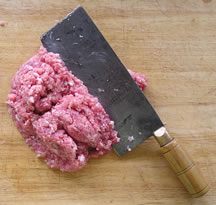 Separate cabbage leaves and blanch in boiling water for about two and a half minutes. Allow to cool; meanwhile, chop the pork with a cleaver, rolling the mass and varying the direction of the chop: this is a matter of personal preference, since finer mincing produces a more tender, “grainy” homogenous filling, while a larger mince, say, 3/16” to 1/4” will be somewhat more firm and varied in texture.  I prefer the larger mince.  You can also put the pork through a meat grinder, using a quarter inch plate. Place chopped meat in a bowl. Wring out the water from the blanched cabbage using a kitchen towel, and chop to 1/4" to 1/2" pieces. Mix this together with meat and all remaining filling ingredients, adding cornstarch last.  Add chicken or pork stock slowly as you mix the filling in one direction.  Continue adding stock until mixture is visibly wet and "sloppy." If you've overdone the addition of liquid, and the fillng is impossible to handle when making the dumpling, add more cornstarch to firm it up. Keep in mind that the filling will firm up when it is refrigerated. Covered, the filling can be refrigerated for up to five days.  When you are ready to fill the dumplings, make one and boil it to test the flavor and texture, and making any adjustments at that time.

Wrappers:
Cold water can be used, but hot water dough produces a softer, more elastic dough, which is preferable in making most dumplings. 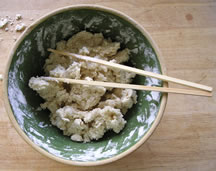 When water just comes to a boil, slowly add it to the sifted flour and mix with chopsticks until a crumbled paste forms.  Knead the dough on a floured board as soon as it is cool enough to handle.  Add flour as necessary to form a soft, elastic dough which is not too sticky to handle.  Wrap with a damp cloth or plastic wrap and set aside to rest for about an hour.  Divide the dough in quarters, and roll each quarter into a rope approximately 1” in diameter.  Cut these into segments of about 5/8”, flatten with the palm, then roll out into a disk approximately 3” to 3-1/2” diameter, and 1/16” to 1/8” thick.
Keep all dough and rolled skins covered to prevent drying.  As I said, the skins can be purchased or the dough kneaded and rolled with a pasta machine, but texture and tradition will be sacrificed.

Making the dumplings:
The manipulation required for making jiaozi may appear daunting, but it is really very simple: essentially, the round disk of dough is folded with the filling inside, and the fold furthest from you is pleated as it is pressed to the fold closest to you, resulting in the traditional scalloped crescent-shaped packet.  Place a circle of dough flat in your left hand.  Moisten the edge all the way around with water, then using a spoon or chopsticks, place approximately a heaping tablespoon of filling in the center.  (If the dough is fresh and moist, the water may not be necessary.)  Fold the skin, and before the edges touch, grasp them with your right thumb and index finger, and beginning at the fold, pleat the outside edge, guiding the dough with your left fingers and press it to the inside (see photos).  As you do this from right to left, you will create a dumpling, which, when set aside on a piece of parchment paper or floured board, will form a flat side perfect for browning when making potstickers.  With a little practice, this process will become second nature.  Note that if you are making boiled jiaozi the dumpling must be sealed very securely to prevent the water from seeping into the jiaozi while cooking.
The dumplings can be frozen if desired—arrange them without touching each other on a piece of parchment paper or floured tray and place in freezer until the surface of the dumpling is very firm and dry to the touch.  You can then put them together in a plastic bag and remove as many as needed in the future. 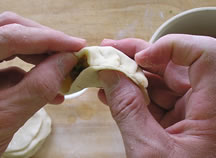 Dipping Sauce:
Dipping sauce for dumplings is traditional in China, and will usually appear served with potstickers and jiaozi in Western Chinese restaurants.  Often, only vinegar is used, especially the famous, dark Qing Kiang vinegar.  But all sorts of variations exists; the sauce below is a sweet version:
Cooking Guo Tie (potstickers):

Pre-heat a flat bottomed, well-seasoned pan or skillet on medium heat; add peanut oil to a depth of approximately 1/16 inch.  Arrange guo tie close together with the flat side of the dumpling in the oil.  Cover and cook for about 3 minutes; after a couple of minutes, lift one or two of the dumplings to see how the browning is progressing. Add water to a depth of about 1/8”—be careful, this will spatter.  Cover again and turn heat down to low or medium low, for about 4 minutes.  After the potstickers are well steamed, uncover and cook for another two minutes, to evaporate any remaining water and to re-crisp the dumplings. Remove dumplings to a platter, and serve with browned sides facing up.

Cooking Jiaozi (boiled dumplings):
One traditional method for cooking jiaozi calls for adding the dumplings to boiling water, then re-boiling after three more additions of  cold water.  However, this causes the cooking time to vary according to the quantity of water, number of dumplings, and size of pot.  I prefer the simpler method of straightforward boiling, depending on the size of the jiaozi.
In a large pot or kettle full of boiling water on high heat, add dumplings and immediately stir very gently to prevent them sticking to the bottom.  Once the water is boiling fully, turn heat to med/med high, and boil for 4 to 6 minutes.  As always, it is recommended that you test the dumpling to make certain it is done.
If you are boiling or frying frozen dumplings, add approximately 1 minute to the cooking time.
Drain and serve in a shallow bowl or platter.  Garnish with sesame oil and minced onion green if desired, although in China jiaozi is generally served without adornment.
Posted by John Sinclair, artist, aka Chef Wang, chef at 4:35 PM